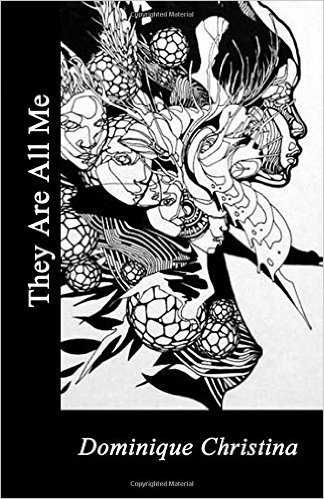 Swimming with Elephants Publications, LLC would like to reintroduce to you to Dominique Christina.

Dominique Christina’s full length poetry collection, They Are All Me, was published by Swimming with Elephants Publications in July 2015. Dominique Christina is an incompatible force in the poetry world and is the author of my collections. SwEP is honored to be able to share her work in this collection.

You can pick up Dominique Christina’s full length poetry collection, They Are All Me, from Bookworks ABQ

or order from Amazon or Barnes and Noble today!

Already own a copy? Please write a review on Amazon, Barnes and Noble, or Goodreads, or submit a review to swimwithelephants@gmail.com for publications on this site.

Dominique Christina is a mother, an educator and an agitator born and raised in Denver, Colorado 40 years ago. She holds two Masters degrees in English Literature and Education respectively. A licensed educator, Dominique taught in the Denver and Aurora Public school systems in Colorado for ten years, directed college prep programs and taught in an adjunct capacity at Community College of Aurora and Metropolitan State University of Denver. She believes that words make worlds. In the slam world (competitive poetry) Dominique began in 2011. That same year she won the National Poetry Slam Championship. In 2012 she won the Women of the World Slam Championship. She won it again in 2014. She’s the only person to win that honor twice.

She is a Rocky Mountain Women’s Institute fellow. Her work has appeared on TV One’s season 3 Verses and Flow show. She has performed with Cornel West and was an invited guest to Washington DC to read her poem “Emmett Till” for the Till family and the parents of Trayvon Martin, a young man who was killed in Sanford, Florida. Her first book of poetry, The Bones, The Breaking, The Balm, was published by Penmanship Books 2014. Her second book, a collection of poetry, essays, and writing prompts, is set for publication in October 2015 by Sounds True Publishing. Her work also appears in numerous literary journals, anthologies, and magazines and has been featured in Huffington Post and Upworthy several times.

Dominique’s family was critical in the civil rights movement. Her aunt Carlotta Walls-Lanier was one of nine students to desegregate Central High School in Little Rock Arkansas. Her grandfather was a shortstop, Hall of Fame baseball player for the Kansas City Monarchs in the Negro Leagues before baseball was integrated. When he left, Jackie Robinson, who would later go on to integrate baseball, took his place. Dominique’s mother, Professor Jackie Benton, is named for Jackie Robinson. She is mother to four wildly expressive children who never use inside voices…ever. But they are the raw material of possible and give her plenty of reasons to praise.