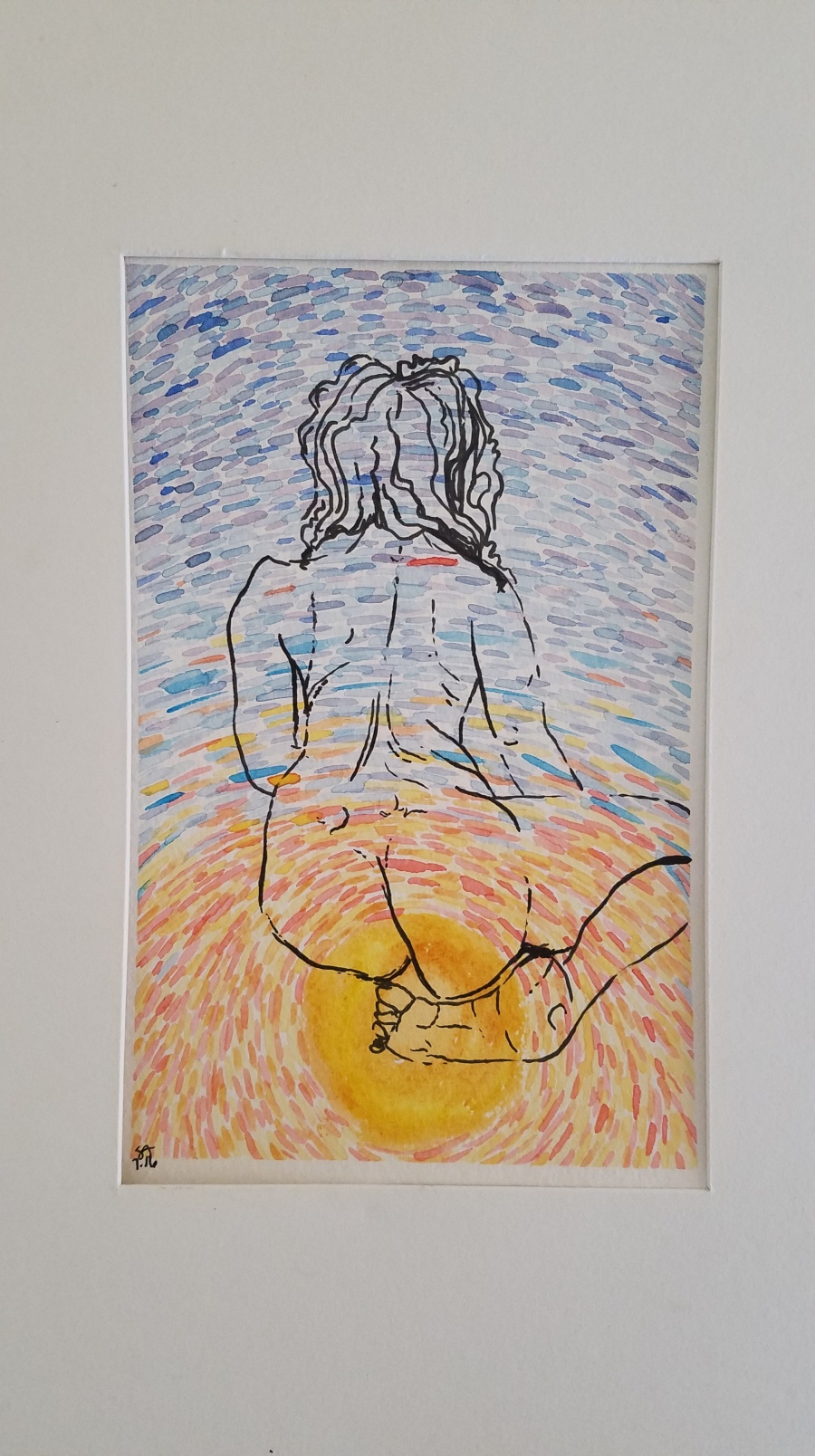 It didn’t take my mother long to comment on how quiet I am, today.

“I’m a pretty quiet person,” I replied, as mildly as I could. Sometimes I am surprised she hasn’t noticed this yet, or assimilated it into her understanding of who I am as a person, in the twenty-seven years we’ve known each other.

I refocused on getting ready for our hike, making sure I had water, stretching my hips.

We started out and it was a lovely day for hiking. My mother kept plowing of onto side paths, wrong ways, and I had to redirect her a few times before I decided to walk a few paces ahead of her and my father. My me about some plants he saw on the trail that were also at the stable where they keep their horses.

“That’s fennel,” I said. “It grows wild around here, and it’s edible.” I pointed out a couple more plants I knew, an invasive species, castorbean, that was abundant in the area, before I went back to walking quietly ahead. My mother kept up a steady chatter behind me, telling the lizards how much she loved them and yelling at the truck doing construction a few hills away, across the highway.

“Get outta here, you trucks, you’re blocking my view of nature!” A Chicago native turned Californian. She was also very upset by the presence of a water drainage pipe, a property boundary sign, and some telephone cables.

We stopped to take pictures at least three times on the way up, and at about eighty percent of the way there was a lone wind cave where we stopped to rest and, of course, take more pictures. I took some of my parents, watching their dynamic through the lens. My father stoic, a trouper, as mom grabbed his hand four photos in and wrestled him gently into a more affectionate pose for photos five through eight. I even got him to smile for the last one.

My turn came; Dad and I switched places. I leaned next to Mom on the low oak branch and smiled at my dad and the camera.

“Look Gav, Sarah’s in one of her ‘I don’t like to be touched’ moods,” my mother announced as she proprietarily threw her arm over my shoulder, pulled me in and put her other hand on my closer shoulder. I allowed it, it was her birthday, and what did it cost me? I could let go of somethings and be nice, on her birthday. And then I thought we were done, I made a move to get up, but she stopped me, put her arm further up my neck and used her palm to turn my cheek so that I was facing her.

“I want to take one like this, with us looking right at each other.”

I looked her in the eyes a moment, light green, ringed in makeup. I’m sure I pulled back from the thought before I made a conscious decision.

“No, this is too much,” I said. I got up and flapped my hands at her, like that might lessen the blow. “You’re making me uncomfortable.”

She gave a heavy sigh. “Can’t say I didn’t try,” as if that was something people accuse her of often.

Say you didn’t try what, I wondered. Didn’t try to make your daughter take an awkwardly staged photo? Didn’t decide to violate someone’s boundaries even though you made it clear you were aware of them?

“All right,” I said, clapping my hands together. “Are you guys ready to go to the top?”

“Let’s just go back,” my mom said, smoking her e-cigarette and facing away from us, to the mountains.

“Well,” I said, “We’re really close. Like ten minutes from the top. I’d really like to go all the way up.”

“Okay, fine. I’ll wait here.” She puffed away, still not looking at us.

“I feel like you’re being passive-aggressive,” I ventured, slightly terrified of a mountain-side blowout and the subsequent silent hike down to the car where I would be both irritated and terrified that my mother would stumble in her anger and roll off a cliff.

My dad and I mentally shrugged at each other and mosied up to the top, chatting about the best path, indigenous plants, my recent trip to the Grand Canyon with a boyfriend of whom I am unsure of their approval. It was pleasant, the view was lovely, I was satisfied with the completion of the hike.

We found our way back to Mom who was sitting on a rock, blowing bubbles. She apparently always has them in her purse. Most people don’t leave the house without their keys, cellphone; my mother: bubbles.

“How was it?” She is still not looking at us.

“Blow some bubbles.” She hands the tube and wand to Dad.

“They make you happy.”

“I’m already happy,” he says, but he blows the bubbles. Makes some jokes about them causing airplane accidents. I marvel at his patience.

We make our way back to the car, pretty uneventfully, and make our way to the beach twenty minutes away where we have planned to picnic.

We get there and it is gorgeous. I jump in the ocean before I grab a chicken leg and eat with my parents.

“I can’t believe I didn’t bring a swimsuit!” Mom exclaims.

“Go naked,” Dad says. He still has his boots on.

“I have leggings on, and a sports bra.”

“I’ve gone in in a sports bra before,” I shrugged. I am smoking at a remove now, so as not to affront my parents who have been off cigarettes for a year. Graciously neither of them comments on my bad habit.

My mother says, “Is that a dare?” She is already stripping off clothes.

She runs in, screaming at the cold and flailing in the shallows. I walk in after her, past the breakers, and I glide around, doing my water dance, letting the ocean buoy and cradle me. I am chilly but at peace, I watch the water ripple through my fingers. This is the happiest I’ve been all day, and I am glad my mother is in the ocean with me. I look back at her.

She is still thrashing in the break line, yelping, plowing her body into the waves. She is smacking at the water as if she can beat it down. She reminds me of a child, specifically a boy child, aggressive for no discernable reason. “These waves are attacking me!” She yells.

And suddenly I realize, this is how it is for her. In her eyes, she is always under attack, she always has to fight, and if there isn’t anything to attack she must create it. Maybe she can’t feel strong on her own, there must always be an oppressor, she is the underdog, the caboose.

And I wonder why she bothers me so much, with that victim mentality; her fibromyalgia, her little toe that moves separate of her cognitive command, the way she views cancer as an evil force reaping strong, sweet people from her life, that time she had lupus, her restless leg syndrome, her recent diagnosis of bipolar disorder and subsequent bout of mood-stabilizing drugs that did everything but and in her words, ‘were going to kill her’.

How can I be so irritated by someone who has been diagnosed with mental illness. Shouldn’t I, as much as anyone who has struggled with depression, be more loving and compassionate? Or is this just the way of it with mothers and daughters, with parents and their children? Is it one of those things I won’t understand until she is dead and buried?

I don’t know when I will know.