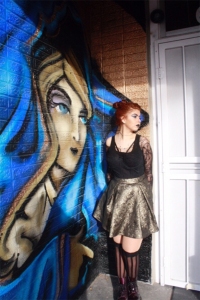 GiGi Guajardo//{gigi bella} is an award-winning poet, musical theatre actress, and educator of the arts. She recently earned the title of Albuquerque’s Woman of the World 2017 representative. She was named a group piece champion at the 2016 National Poetry Slam and a National Semi-Finalist at the 2013 National Poetry Slam as a member of the Albuquerque Slam Team. She is a student at the University of New Mexico pursuing a bachelor’s degree in American Studies with a Theatre minor. She loves marshmallows, sparkling purple lipstick, and Wes Anderson movies. She continues to be a hopeless romantic.