Today, midday
While walking down the street
I inhaled and smelled Iran
And for a moment
I forgot my people were
Banned 2.0
Travel restricted
With bills pending for
Sanctions
And preemptive force
To rain bombs
On my cousins
For a moment
I forgot the hate and
Instead
I smelled the honeysuckle
In my grandmother’s front yard
And I was
Transported to the bazaars
Filled with people
Who look like me
Who tweeze one eyebrow
Into two
Like me
Who can pronounce my name
Properly
People descended
From poets like Rumi
And super hero attorneys
Like Shirin Ebadi
For a moment I forgot
My blood shot eyes
And my pounding headache
From restless nights
And aggressive headlines
Spewing lies
For a moment
I was just me
Unapologetically
Bound between two countries
Me

Previously published in ‘ARTS by the People’ on March 21.

Sahar graduated from the University of Washington Law School and is a member of the New York bar. She also earned a Masters in International Studies from the University of Washington, and graduated cum laude from the University of Southern California with a dual Bachelor of Arts in French and International Relations. Additionally, Sahar attended the Sorbonne Université in Paris, France from 2003-2004 and received a diploma in International and European Law from the Université Jean-Moulin in Lyon, France in 2008. She has served as adjunct faculty at both Seattle University and the University of Washington School of Law. Sahar is a past president and co-founder of the Middle Eastern Legal Association of Washington, as well as the founder of its Legal Clinic – the first Middle Eastern Legal Clinic in the country. She is a past board member for the ACLU, the Northwest Immigrant Rights Project, and the UNA – USA. She is a current board member for One America Votes. She has been published in the Seattle Journal for Social Justice, the Seattle Journal of Environmental Law, and the Gonzaga Law Review. Her poetry has been printed in ‘Writers Resist’ and the ‘Writers Resist: Anthology (2018).’ It has also been featured in the Feelings journal and Not Your Mother’s Breastmilk. Her favorite Persian dish is Fesenjoon, and in 2016 she finally mastered her Tadiq technique. 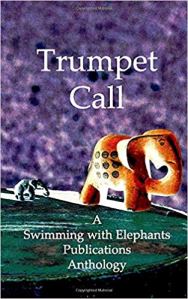 Click here check out the 2019 Anthology:  Trumpet Call; a Swimming with Elephants Anthology available for only $12.95.

One thought on “Weekly Write: 2.0 by Sahar Fathi”