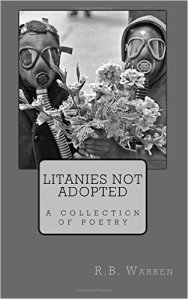 Bob Warren is without credentials of any kind. He never graduated from anything, never received a diploma or certificate of completion from any sort of institution of either higher or lower learning.

At the age of thirteen, he stole all of his school records and spent that school year teaching himself at the Detroit Institute of Arts. He quit school at fifteen. At seventeen, he took part in his first civil rights march. At twenty-one, he was elected Unit Steward for the Operating Engineers.

Two decades later in Houston, he went to work at a poverty church. His jobs were to lead morning prayers and to beg food for 125 to 150 families a week. He was for nine years the Associate Director for the Albuquerque Storehouse. Subsequent to that, he was Resource Director for Habitat for Humanity in Valencia County.

He is married to Barbara Warren who came to the marriage with five kids who have somehow become 19 grandkids and 18 great-grandkids.

Pick up Litanies Not Adopted, Warren’s first collection of poetry, from Amazon or Barnes and Noble.