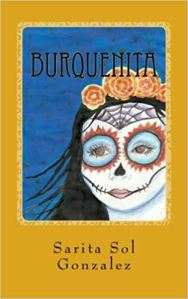 Sarita Sol Gonzalez is a Performance Poet and fifth grader from Albuquerque, New Mexico. Writing her first poem when she was in second grade, Sarita is one of the youngest writers in the Albuquerque poetry community. Her poetry reflects her love of her community and passion for her culture. She has been published in various anthologies including Kids With Causes: A Poetry Anthology of Youth Voices and Las Palabras: Mothers and Daughters (Swimming With Elephants Publications). She has also self-published a chapbook titled Solita: Ancestors, Familia, and Mi Corazon. Sarita was a featured speaker at Albuquerque TEDxYouth 2015, speaking on the role poetry plays in her life and her community. In April of 2016, Sarita and Elena Medina,12, had the honor of being asked by the US Poet Laureate, Juan Felipe Hererra, to perform with him at the ceremony for the ending/reinstating of his Laureateship at the Library of Congress in Washington DC. Sarita has also shared the stage with many amazing poets including poetry duo Sister Outsider (Denice Frohman and Dominique Christina), Albuquerque Poet Laureate Jessica Helen Lopez, New Mexico State Centennial Poet Levi Romero, and many others from Albuquerque’s vibrant poetry community.