I think of the soft blue sweatsuit you were wearing that warm day in May. Then I think of the way you stared through the bars of the crib, and us. You must be a teenager by now; do you still sleep in a crib? I have a photo of you in my office that one of the students took—do you remember the boy with the red hair?—as I clipped your fingernails through the bars. I can’t look at it very often, and I am grateful that in this photo I cannot see your face. Sometimes my heart still twists up when I think of you, lying on your side staring into a dark tiled room, making occasional noises in neither English nor Mandarin.

Did you know I thought you were a boy the whole afternoon? Blame it on the bowl haircut or the blue sweatsuit. After two weeks in China, I should have known so many of you become androgynous in the orphanage. But I knew the gender of the tiny girl in pink who grinned and stole food. We brought snacks for all the children, and she grabbed the largest hoard. Everyone but you and the infants had a stash, curled their bodies around their plastic-wrapped food. Midway through washing our hands, the water stopped. The German nurse told us the director often turns off the water, that at mealtimes the workers put out food and let the children fend for themselves. Fewer diapers this way. We thought of this when they served us a private cafeteria feast. So much broccoli and pork. So many noodles choking in our throats. The German nurse said, “Eat. If you get upset. I can’t come back to help them.”

I picked you up to help you eat the smashed bananas. The nurses said you would choke and throw up if you ate; they said you only ate milk. I offered a spoonful, slow. Then another, praying it wouldn’t make you sick later.

After I picked you up, there was no reason to put you down. They told me later you were nine years old, but I could not believe you were more than five. You were stiff and quiet in my arms, sometimes seizing into fast shallow breaths. It’s OK, I would tell you, rocking back and forth. We swayed down the green-gray hallway, stopping in the bathroom where two children sat on the floor in a shower stall. One kept laughing and laughing as the water gurgled. The other sat as silent as you. “They protect each other,” one of the nurses told me. The tiny pink grinning girl ran up to me and demanded more snacks. When you started to hyperventilate again, I patted your back. Your spine was like the ridges of a rock wall.

When the German nurse told us we had twenty more minutes, and went back to checking vital signs and bruises, I stepped outside into the courtyard with you. You blinked; so much green and sun. The guard dog in the courtyard barked at us, asking who are you? We walked over to answer. He stared at us from behind a circular fence surrounding a tall tree, and you stared back at him, that furry black thing. Then you leaned your head on my shoulder and sighed.

Something inside me didn’t so much crack as give way. I looked at the white van we’d ridden in from Shenyang, and thought about our flight on Sunday, your crib in the big tiled room, the bananas the workers said you couldn’t eat. If I made a run for the van with you, the German nurse could never come back to feed you.

When she said it was time to go, she didn’t seem angry that it took me a long time to walk you back to your crib and lay you down. You stared out into the room, like you had when I found you. I don’t know what I said. Maybe nothing. I speak English after all. This was not the right place to say I love you or I’ll come back because maybe lying is worse than never having been here. So I whispered goodbye; it’s OK; goodbye; it’s OK while I put you back in your bed and walked away.

Did you know that for months afterwards, I sent emails to check on you? I asked as casually as I could, in a way that someone who is voluntarily childless and in a bad marriage will ask after a child thousands of miles away in an orphanage that does not give up children or feed them. You would never be coming home with me. So when I prayed, it was that you had food. That you had green afternoons and sunshine and a dog barking hello! And that sometimes, when someone rubbed your back and clipped your fingernails and told you it was OK, this would feel like a happy, reoccurring dream you couldn’t quite place.

Katie Karnehm-Esh’s background is in creative nonfiction and poetry, with a Ph.D in creative writing from the University of St Andrews, Scotland. Her writing has been published in Whale Road Review, Barren Magazine, The Cresset, The Other Journal, and Windhover. Additionally, she writes a monthly blog for Annesley Writers Forum. Her writing often centers around holistic health, travel, and faith as well as social justice, and she welcomes the opportunity to learn from fellow writers. 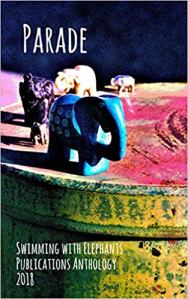 Click here check out Parade: Swimming with Elephants Publications Anthology 2018 available for only $10.95.