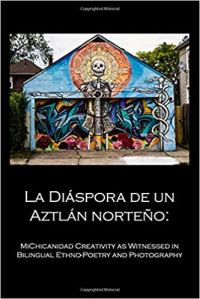 “La Diáspora de un Aztlán norteño” details the unique ‘MiChicanidad’ experience of life on the border in Michigan. This is another definition of Aztlán, as seen on a Northern Border, this time between Canada and Southwest Detroit’s predominantly Mexican American neighborhood. Growth of this Spanish speaking barrio began in the earlier part of the 20th Century due to the rise of migrant labor and employment at factories. Later, the area prospered as those immigrants began to choose to stay. Their addition to the interpretation of life on the border, as well as the community’s vibrant nature, is unparalleled especially as it is defined through creativity.

In addition to the scholarly research detailed above regarding La Diáspora de un Aztlán norteño, this project employs an interdisciplinary and collaborative approach. In Spring 2017, Dr. Rottschafer led an excursion to Detroit’s Southwest Mexicantown with some of her students.  This time Mexicantown was framed through the lens of her Latinx Literature course which also studied the diaspora of this area.  Specifically, Rottschafer introduced her students to the murals at the Eastern Market, TAP: The Alley Project, and Garage Cultural. Students then created bilingual ethno-poetry to reflect upon their experience of this intersectionality of Mexican and Mexican-American history and Visual Story through Art.

In Spring 2018, Dr. Rottschafer continued this study in her Chicanx Literature course. Referencing Levi Romero, New Mexico’s Centennial Poet and his text Sagrado: A Photopoetics Across the Chicano Homeland, students wrote poetry invoking a sense of place, a cultural fusion or clash, and their right to claim authenticity of belonging.

To culminate the project, Dr. Rottschafer returned to Detroit in June 2018 with her partner and photographer, Daniel Combs. His photographs of the Murals in the Market within the Eastern Market district, TAP: The Alley Project, and the Garage Cultural murals in Mexicantown create a Visual Story. The images accompany the scholarly research on the MiChicanidad experience, which in turn reflect the voice garnered in bilingual ethno-poetry of the MiChicana community.

Find this publication on Amazon or purchase directly from Dr. Rottschafer.