Of Small Children / And Other Poor Swimmers

Available on Amazon and Createspace for $12.95

Of Small Children / And Other Poor Swimmers is centered in the push-pull of place. Hendrickson wants to leave behind his Florida childhood, where every memory is still moist, but he continues “calling on the voices” and crossing back, wading into love, loss and danger with vivid imagery.

— Lauren Camp, author of three collections of poetry, including One Hundred Hungers, and winner of The Dorset Prize (Tupelo Press)

Brian Hendrickson demands the inclusion of the real press of the discursive and meditative into his poems, by juxtaposing multiple levels of diction, and by frequently shifting between the anecdotal, the essayistic, and the lyrical. Through his careful use of these techniques, Hendrickson is able to achieve James Sculley’s ideal of “audacious speaking”: he refuses to capitulate either to the lyrical moment or the abstraction, and so his poetry exists and persists as an urgent place for utterance of consciousness. 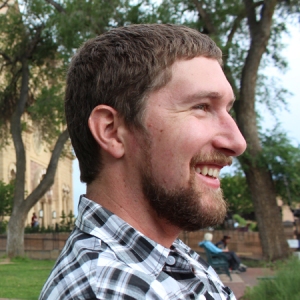 Brian Hendrickson’s poems have appeared or are forthcoming in a range of publications, including Indiana Review,North Carolina Literary Review, and New York Quarterly.

For his poetry Brian has been nominated for a 2011 Pushcart Prize and Best of the Net award, recognized as a 2013 finalist forSmartish Pace’s Erskine J. Poetry Prize, and awarded a 2013 New Mexico-Arizona Book Award for appearing in Beatlick Press’ La Llarona anthology.

Since earning an MFA in Creative Writing and Literary Arts from the University of Alaska Anchorage, Brian has taught and tutored writing at colleges and correctional facilities in Alaska, Florida, North Carolina, and now New Mexico, where he is currently pursuing a PhD in Rhetoric and Writing. Brian’s scholarship focuses on the role of writing in social movements and student activism.

Brian Henrickson’s collection of poetry, entitled Of Children / And Other Poor Swimmers, will be available from Swimming with Elephants Publications, LLC in September 2014 and will be found on Amazon, Barnes & Noble, and other on line distributors, as well as local bookstores.