“Jessica Helen Lopez’ Provocateur is a revolution of words bringing to life important issues that otherwise may stay hidden inside conservative minds. Lopez is courageous in her written work. She pushes and pushes to make one feel uncomfortable enough to become informed. Her words and life are charismatic and entice one to feel. She is not threatened and is a powerful voice for the 21st century. She is gifted and energy wrapped up in fire and poetry. She does not censor—she gives us honesty and sometimes controversy, regardless of the path she is on she gives her readers life because after reading her words one feels all the feels—agree or disagree with her,  you will feel, you will feel this fire that she lives and breathes each and every day. She unites women of all walks of life, choice, and color into some kind of wonderful mother, sister, daughter, witchy, powerful self—in fact, we all have many names “ancient, mighty names” and in Lopez’ Provocateur, she gives us power to sing with her loud and clear.” 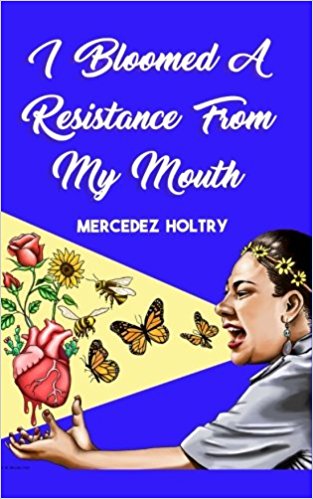 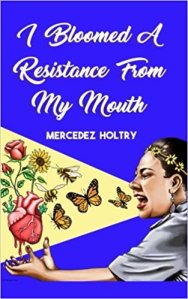 Book ended artfully by two poems (“Dear Donald Trump” and “For Latinos Who Voted for Trump”) that bring much needed attention to the political climate and how the Trump presidency affects her and her people, Mercedez Holtry’s newest publication from Swimming with Elephants Publications is everything you could imagine from the renowned poeta. It, as the title proclaims, is a resistance of performance, blooming like sunflowers stretching to an Albuquerque sunset sky.

Mercedez goes further in speaking not only about the national political climate but also local change and gentrification of her beloved hometown — Albuquerque, New Mexico — in poems like “La Central gets a Makeover” in which she calls out by name former Mayor Berry and the many failings of the Albuquerque Rapid Transit (ART) and its continued construction. Woven with a deep woe for being the final generation that might cruise Central Avenue, she takes you on a journey of the Albuquerque she knows and loves.

But there is a softness to this resistance, too. In “You Bring Out the Burqueña in Me,” dedicated to her beloved, she journeys through all the makings of herself and her culture, her love and her home, painting an image that echoes the vulnerability in the poem prior, “The Heat of Summer.” Both veer away from the political undertone of this publication and yet, there is still a softly flowering rebellion in her words. A rebellion of self, of love, of light. 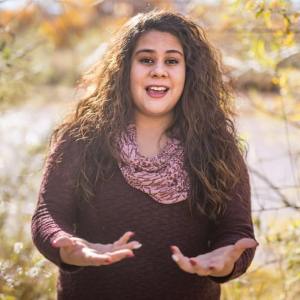 But as with nature, there is darkness behind the light. A persona poem, entitled “La Llorona Speaks,” takes the reader on a shadowed journey into muddy waters of loss, exploring the legend of La Llorona, or The Wailing Woman. Another stunning exploration of her own culture, this particular poem was a hauntingly beautiful read.

As ever, Mercedez does not fail to enlighten and educate with her second collection from Swimming with Elephants, bringing an artfully entwined variety of work.

You can purchase I Bloomed a Resistance from my Mouth on Amazon, along with her first publication, My Blood is Beautiful. And don’t forget to like Mercedez’s artist page on Facebook, and keep a lookout as she heads out for the Blooming Resistance Tour this May (and for inquiries about booking her for a feature, please contact our partners at sugarbookingentertainment@gmail.com).

Heralding from Portland, Maine, Beau Williams describes himself as a “fairly optimistic” poet, and what better way to describe his newest collection of poetry from Swimming with Elephants Publications than as “fairly optimistic.” Bittersweet journeys to bar floors and the bottoms of bottles, Nail Gun and a Love Letter is reminiscent of beat poetry days and the pilgrimages we must take to find ourselves.

Whether these pilgrimages occur literally or otherwise, Beau has managed to make an astonishing and beautiful book; these are love letters soaked in liquor, poking nails through your heart only to fill the holes with the sort of honesty that only being three sheets to the wind can bring. This book is better described as a cure for hangovers, best enjoyed with a hot cup of tea (or maybe a hot toddy for those frigid winter nights). Beau is undeniably honest in his descriptions, and there’s something chilly in his work, reminiscent of winter along the Northeast coast, but he always manages to wrap the reader up in warm words. From micropoems like “Sacred Vows” to full length bar hymns like “Looking for Brooklyn in a Shit Bar in Portland,” it’s clear that Beau has an inspired affinity for storytelling based heavily in symbols and setting. This book is a journey.

I first met Beau when he was on his own journey with GUYSLIKEYOU, a poetry collective with Wil Gibson and Ryan McLellan. It was his soft demeanour that caught my attention, allowing a contrast to his occasionally sharp edged poetry. Again, this brings to mind poets like Allen Ginsberg; there is a subtlety in these pages, a sharp as a nail, unforgiving as alcohol sort of sensation. And yet, reading this collection was like having a drink with an old friend. Like coming out of the Maine cold to warmth, at long last. And maybe he’ll burn a bit of you, but he will always wrap you up again with a love letter.

Nail Gun and a Love Letter will be released soon. Meanwhile, don’t forget to like Beau’s Facebook page to show him some support and for book release updates.

Welcome, Paulie Lipman, to the Swimming with Elephants Publications family! 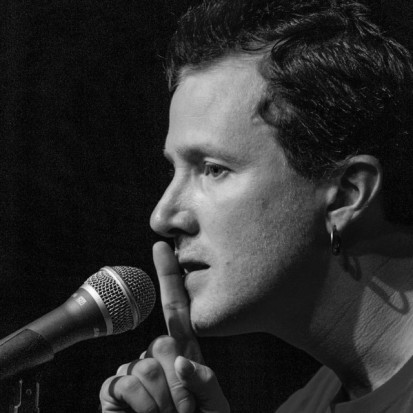 er, Colorado, Paulie comes “from below” and rises to join our parade of writers.

A two time National Poetry Slam finalist, Paulie Lipman is a loud Jewish Queer poet, performer, and writer. His work has appeared in the anthology ‘We Will Be Shelter’ (Write Bloody Publishing) as well as The Emerson Review, Drunk In A Midnight Choir, Voicemail Poems, pressure gauge, and Prisma (Zeitblatt Fur Text & Sprache).

A magical individual, I’ve had the chance to share at least one meal with Paulie in a group setting during the 2015 Denver 40 oz. regional slam; from there, I can recollect Paulie’s genuine kindness, their welcoming spirit, their talent in writing and performing, their endless inspirations and ideas, and their sort of soft loudness that allows others to be heard while their voice lifts in passionate intervals. At the time, I was a “newbie” to competitive slam, but it was with that interaction that Paulie, a veteran to slam to my eyes, made me feel heard throughout the group conversation, going so far as to ask me questions personally so I might be involved in the busy-ness that often overwhelms when you’re sat at a table full of poets.

Their upcoming title with SwEP, “from below/denied the light,” is a deep exploration o

f addiction, sobriety, spirituality, and identity. With micro-poem interludes, Paulie captivates with self-recognized flaws from the beginning, sharing with readers:

I am a snob when I have no right to be

I judge people who don’t read

Even though I’m a recovering junkie, I have
little tolerance for current ones

I love and help those who deserve it, don’t
ask me how I determine that

Nevertheless, he shines as an example in this brutal self-recognition of knowing he may be “horrible to love”; and still, his work is so easy to fall into as he touches on subjects of his queer identity and how it conflicts with his Jewish blood, and his path into recovery as he addresses past self-destruction.

Of course, with all this to consider, as the title may suggest, Paulie’s book is not a “light” read. Combatting demons throughout, Paulie has managed to create a subtle journey into sobriety and spirituality without overwhelming in its occasional anger and the quiet sadness of providing his own funeral dirge (in a poem aptly named Dirge). And even then, there is a tenderness on the final, lamentful line (but I’ll leave that to mystery).

Beautifully worded and artfully ordered, “from below/denied the light” is available for pre-order on Paulie’s site. 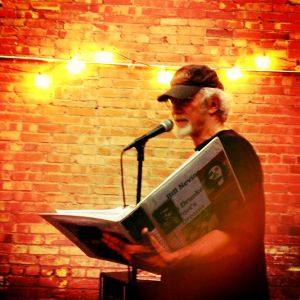 Bill Nevins grew up Irish Catholic near and in New York City in the 1950’s and 60’s. He moved to northern New England and raised his three children, one of whom, Special Forces SFC Liam Nevins, died in combat in Afghanistan in 2013. Bill has lived in Albuquerque, New Mexico since 1996. 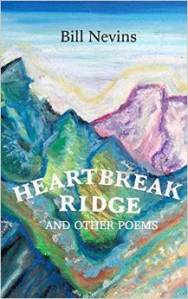 Bill Nevins hosts second-Wednesday monthly poetry readings at The Range Cafe in Bernalillo, New Mexico. He can be contacted at bill_nevins@yahoo.com and at Bill Nevins on Facebook. 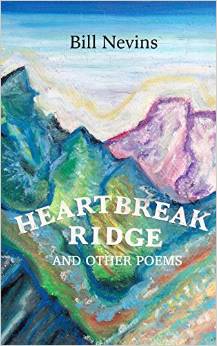 Poems by Bill Nevins
Edited by Pia Gallegos
Available at Amazon and CreateSpace for $10.95.
Also available at Bookworks ABQ  and Cafe Bella Coffee and other Swimming with Elephants events.

“Heartbreak Ridge is a campfire of the resistance, a place where all kinds of poems-from jeremiads, scourgings, and passionate rants to absolutely beautiful works of love and loss-gather between its covers. Bill Nevins is a truth-teller,and what he has to tell us about the last half century of American life and politics is a matter of highly charged poetic urgency.”

“When New York Was Irish” and many other works of poetry, music and fiction.