Swimming with Elephants Publications, LLC would like to reintroduce to you to Bill Nevins.

Bill Nevin’s collection, Heartbreak Ridge and Other Poems, was published by Swimming with Elephants Publications in August of 2014.

“Heartbreak Ridge is a campfire of the resistance, a place where all kinds of poems—from jeremiads, scourgings, and passionate rants to absolutely beautiful works of love and loss—gather between its covers. Bill Nevins is a truth-teller,and what he has to tell us about the last half century of American life and politics is a matter of highly charged poetic urgency.”

“When New York Was Irish” and many other works of poetry, music and fiction.

Pick up Bill Nevin’s, Heartbreak Ridge and Other Poems, from Bookworks ABQ during the month of April or order from Amazon or Barnes and Noble today!

Already own a copy? Please write a review on Amazon, Barnes and Noble, or Goodreads, or submit a review to swimwithelephants@gmail.com for publications on this site. 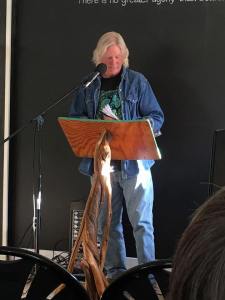 Bill Nevins grew up Irish Catholic near and in New York City in the 1950’s and 60’s. He moved to northern New England and raised his three children, one of whom, Special Forces SFC Liam Nevins, died in combat in Afghanistan in 2013. Bill has lived in Albuquerque, New Mexico since 1996.

Bill continues to perform at Voices of the Barrio, Fixed and Free, Jules Poetry Playhouse, Sunday Chatter and other Albuquerque poetry gatherings. He has recently performed at SOMOS in Taos, NM and The Maple Leaf Readings in New Orleans.

Bill has retired from teaching and divides his time between homes in the towns of Albuquerque and Black Lake, New Mexico, and traveling.